Recent work on Wagonette by Peters 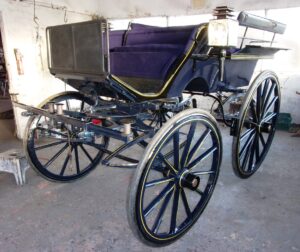 The front seat panel and molding around around the frame had been over painted may times. The detail was no longer clearly discernible and the paint was blistering and coming away.The cloth trim on the inside had also been re covered three times without removing the earlier cloth covering. hundreds of tacks now rusting had been used to secure successive layers of trim. The only option now was to strip out all the trim, remove the half spindles carefully extract all the old tacks and strip all the paint from this area. Minor damage to the framing had occurred from the insertion of so many tacks which had to be made good. The whole area was now re painted and the half spindles re attached. 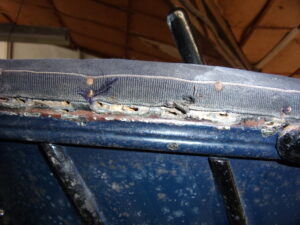 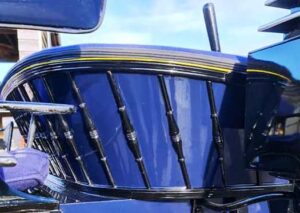 Other parts of the carriage were only repainted where absolutely necessary. Conservation and cleaning with careful touching in of some areas were sufficient to meet the owners requirements. The pole appeared to have been shortened and had to be renewed in English ash to accommodate the appropriate size of horses.

The near side axle box had been damaged necessitating its removal to fit a threaded sleeve to once again allow the attachment of a brass oil cap.

All of the trim was renewed in an appropriate cloth, plain back with padded role around the upper edge of the front seat and plain covers the rear seat backrests. Three buttoned and piped seat cushions were remade using the original horse hair filling.